Ovidiu Adam reports that he is happy to be able to sail the Flying Dutchman on Baseline Lake with my colleagues and friends from the Michigan Sailing Club. The venue offers wonderful conditions for both casual sailing and racing, allowing a couple of FDs to sail, race, and shine in the middle of a mixed fleet. We are now expecting a 3rd boat to join the party.

Ken Frankel has been sailing on Lake Washington with crews Kim McDonald and Ondrej Lehecka.   Ken has also been doing some very trick work on his mast.   Check out the block that Ken made to repair his carbon mast.

The backing plate was CNC’d machined. It properly reacts to the forces from the genoa halyard that are trying to pull the sheave forward out of the mast, as well as downward along the mast.  Rivets seem to be the standard approach, and this results in very concentrated loads that a carbon mast doesn’t deal with very well. In the pictured setup, the machine screws serve only to keep the sheave from falling into the mast; the screws themselves have no significant load. The metal plate distributes the forces over comparatively large areas, reducing the pressures dramatically. This is much friendlier to a carbon structure.

Ken has a whole CNC machine shop equipped to make aerospace parts. Ken would welcome other FD sailors who have projects for their boat to come to his shop to use the facility to fabricate their own specialty items.

Here is a short note to start off your week.  Henry Weinhardt and family have been sailing USA 838 on Lake Simcoe for 15 years.   The boat and the sailing venue look fantastic!   Henry reports that the boat is in great condition and that he loves the boat.  Henry, thank you for the short note. 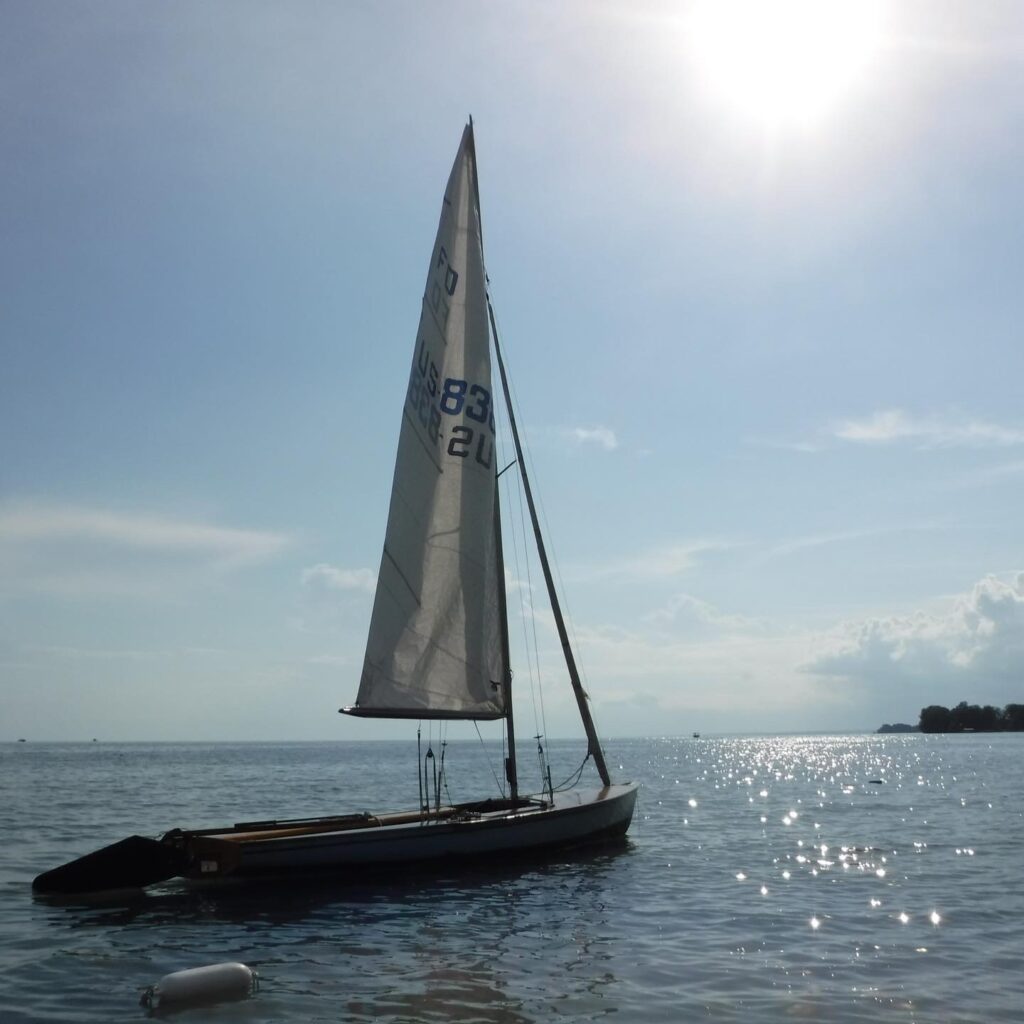 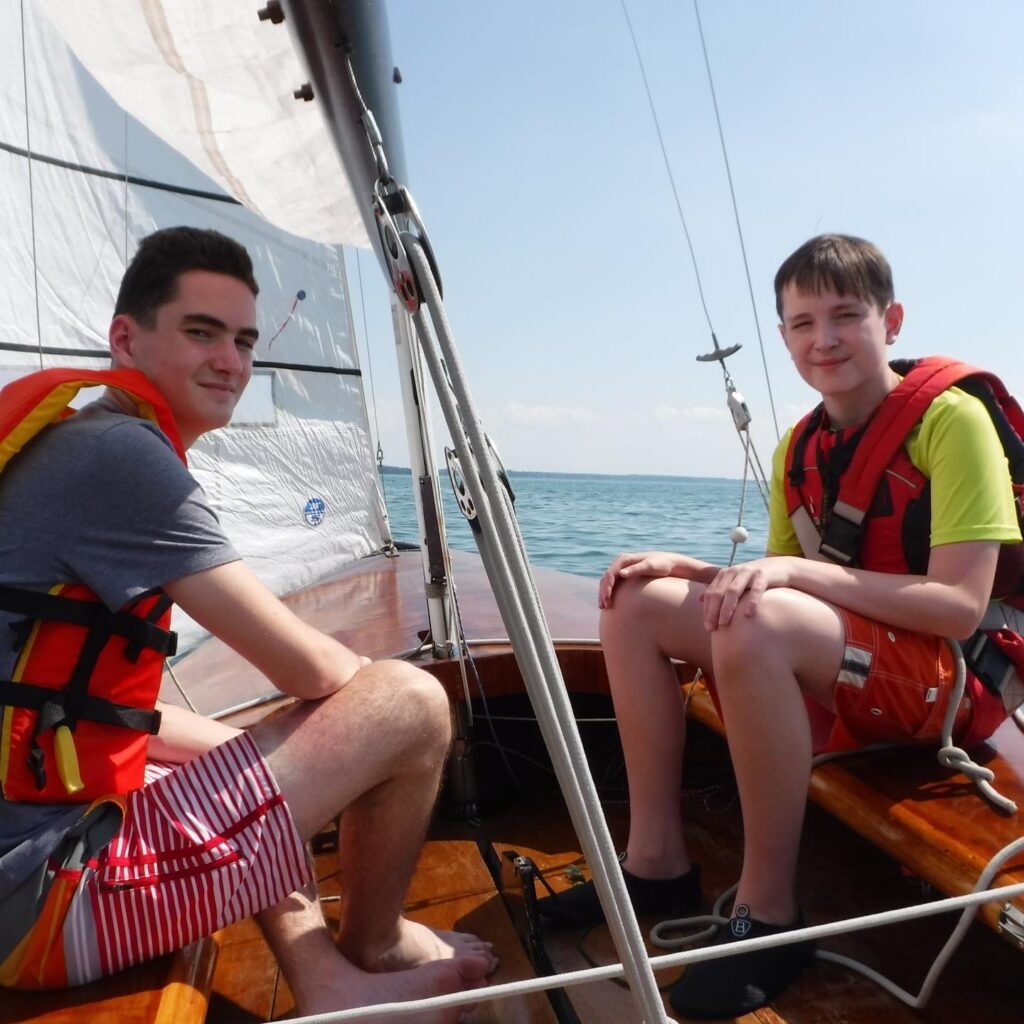 During my 5-week visit of Austria and despite restrictions from the Corona virus, the opportunity arose for your US Class Secretary/Treasurer to compete in the Austrian Championships together with a new young sailor who recently bought a used 1985 Mader FD. There was a steep learning curve for Gregor to learn everything from how to set sails to trapezing. We also had a number of equipment failures, but we were able to finish all seven races except for one. Here is a quick summary of the Championships.

Because of Corona and a bad weather forecast, probably none of the 23 teams from six nations (from Germany, Switzerland, Czech Republic, Croatia, Great Britain, and Austria) expected such good races on the water and such a relaxed get-together on land.

The Austrian Championships started on Thursday evening, with a lot of rain and traditionally fine burgers and beer, all in strict compliance with Corona rules. At the time, nobody counted on sailing on Friday.

After the usual North wind suddenly appeared on Friday afternoon, three sporting races could be completed in 10 to 15 knots of wind.

GER-87 with Hans-Peter Schwarz and Roland Kirst sat confidently at the top of the ranking. AUT-39 with Martin Pfund and Christoph Zingerle positioned themselves with good results for the title of national champion.

On Saturday, the very accomplished race committee sent the FD fleet, including the six UFO-class boats, which also competed for their champions, onto the water despite the thunderstorm clouds on the entire horizon. And immediately both classes had to endure a heavy downpour, which was followed by bright sun and calm winds.

Some boats took advantage of the long waiting time for a trip to Pertisau on the other side of the lake for refreshing ice cream. The North wind set in late in the afternoon, allowing just enough time for a fourth race to make the FD Championships complete. Last year’s winners GER-222 Felix Albert and Lukas Merz won this race, followed by GER-87. In the evening, the traditional party in front of the boathouse was not detracted by Corona: there was great music, fancy drinks, and people even waltzed on the grass.

On Sunday morning it cleared up and the expected southerly wind set in and lasted until late afternoon.

Three exciting and challenging light wind races were sailed, of which GER-222 won and thus secured the overall victory, followed by GER-87 in second place.

Third in the overall ranking went to the Swiss Stephan Fels and Ulf Hügel with SUI-1.

It was a wonderful championship – thanks to the confident race management on the water and the experienced team on land around Paul Hullehaar, Martin Pfund and Christoph as well as Philipp Zingerle. Thank you so much! We are already looking forward to next year, then hopefully without Corona. You can find the overall result here.

Gerhard and I have postponed the National and North American Championships until next year due to risks associated with COVID-19. The Nationals were scheduled for August 7-9 at the San Diego Yacht Club (SDYC) in conjunction with the Olympic Classes Regatta. The North Americans were scheduled for October 9-11 at the American Yacht Club (AYC) in conjunction with the High Performance Regatta. The good news is that both SDYC and AYC have agreed to host our Nationals and North Americans next year in similar time frames.  The National Championships will return to the East Coast in 2022. Our decision follows a similar decision by our International Class to postpone the Flying Dutchman Worlds. The Worlds had originally been scheduled for this September in Altea, Spain, but will now take place in 2021.

The Flying Dutchman is a beautiful boat. Although our championships are postponed until next year, I hope that you are able to get out sailing on your own to enjoy the very best that sailing has to offer. You can enjoy the Flying Dutchman vicariously by reading online old Flying Dutchman Trapezes (Trapeze) and Flying Dutchman Bulletins (Bulletin). You can also check out or contribute to Flying Dutchman news articles (FD News). Now is a great time to work on your boat.  You can buy and sell FD equipment here: FD Classifieds.  Peter Carr’s USA Flying Dutchman Facebook page is also available for your pleasure here: FD Facebook Group. If you would like to join the FD Google Group, please contact me. There is no better boat than the FD. We look forward to seeing you out on the water soon!

The IFDCO had to make the decision to postpone the worlds because of the Corona virus. The official announcement is here:
https://www.sailifdco.com
The new date for the Worlds is not set yet, but it will most likely take place in September 2021 in Altea, Spain. I have heard there is wonderful sailing there in September.
This is not the only regatta impacted by the virus; I am sure a lot of local clubs had to cancel or postpone events. Doug will make a separate post on the impacts to the US FD race calendar.
Gerhard PanuschkaUS Flying Dutchman Class Secretary/Treasurer

This year’s championships took place on the West Coast at Richmond Yacht Club in the San Francisco Bay Area, concurrently with the annual Totally Dinghy event.

The Competitors:
Five boats competed in the races:

END_OF_DOCUMENT_TOKEN_TO_BE_REPLACED

After a number of false starts a small group of U.S.Â Â Flying Dutchman sailors finally committed to doing the World Championships in Nelson, New Zealand. The initial indecision centered around only three teams being prepared to make the trip. Once USA 153 (Doug and Michael), USA 36 (Lin and Kim) and NZL 145 (Paul and Brendan) finally committed to shipping their boats, all the necessary arrangements were quickly made. USA 87 (Jim Algert and Bruce Barrett) became a last minute addition.