The 2022 edition of the International Flying Dutchman North American Championship was held on Lake Canandaigua in upstate NY. The namesake club  has a long history of hosting great sailing events, among which the Cannonball Regatta is famous next to many editions of FD Nationals and NAs.

The venue is really very nice, with light wind most of the time and shifty conditions. It is a lovely lake and beautiful environment. The club’s main building is located near the docks (albeit on the other side of a low traffic road), and is fitted with all the expected amenities and comfort: clean showers, dressing rooms, restaurant with both saloons and patios, and a well-supplied bar. In the restaurant, Tammy will serve the best fish and chips ever. Past the clubhouse in a little clearing under the trees there is a cozy camping area for sailors preferring to avoid the daily commute to hotels in town.

This year the Flying Dutchman NAs were run as part of the CYC’s “Dinghy Regatta”, which also included Laser and V15 on the same course, but with separate starts. For the V15, the event is also known as the “Muddy Mast” regatta. The name has to do with the tippyness of the V15, the shallow water in some areas of the racing course, as well as gusts hitting 30 degrees off course with a force twice the average wind.

The Westerly wind we had this year did fit the above description in the first two days, blowing 10-12kn with gusts of 20. The one FD which capsized during the event did muddy its mast and unfortunately retired for the rest of the day.

The schedule called for two full days of racing in both the morning and the afternoon, with a two hours lunch break, followed by a short day (morning only) on Sunday. Given the good wind, we raced 6 races on Friday (3 in the morning and 3 in the afternoon), and same on Saturday, and one drifter on Sunday morning, totaling 13 races overall.

As a result of the Westerly wind the top mark was close to the club, so the Race Committee has wisely shortened the last race in each of the series to finish at that mark and have a quick return to shore. Overall, the Race Committee did an excellent job minimizing the down time between races as well as the commute between the marina and the race course. The course was the standard Olympic triangle and run, with a downwind finish (, except for the last race in the series as mentioned above). On average a race was about 30 minutes long.

On Sunday the forecast read 0kn wind, but a local thermal did provide enough breeze for one race, which most of the boats did finish.

We had 6 FDs on the start line converging at CYC from all directions: Maine, Alberta/Canada, Michigan, Ohio, New Jersey, California. Special acknowledgements go to Chris Liberti, FD administrator for the NE region of the USA, who sent tons of emails to herd racers towards the racing area. Derrick Hiltz coming from as far as Alberta, and Valeria Takas crewing valiantly on an unknown boat. Who would have guessed that Valeria has sailed FDs for less than three months before this event? And last but not least, Paul and Eric Hemker, towing 3 boats all the way from Ohio.

The teams were also interestingly paired: 2 boats sailed by brothers (Wrenns and Adams), father/son (the Hemkers), husband/wife (the Libertis), a long time seasoned team (Costelloe/Baker) with 50 years of sailing together, and an improvised makeshift (Hiltz/Takas), first time together.

The end results do reflect the same breakout: the first two places were disputed by the brother teams, the next two by the family teams, and the last two by the non-related, with 1 point edge for the makeshift team. Find the results below.

Given the ample wind shifts during the races, there was little strategy at play for the sailors, and many have turned their mental computers off, relying on the next shift to dictate the moment of the tack. As for us we tried our best to follow the good plan learned from the great sailor and instructor Andrei Butucaru under whose guidance we had the privilege to sail in a previous life. His strategy was simple, and yet efficient: “Start first and finish first”.

The good thing about this strategy (, in addition to a better position in the overall results), combined with the Race Committee’s decision to stop short the last race in the series next to the club, is arriving first on shore, getting the best dock, and be the first to check the tasty lunches that Sue Raymond has prepared for us.

I am learning that Sue, a former CYC Commodore and accomplished FD sailor is still the heart and soul of most CYC events which, like this one, do owe a lot of their success to her invaluable efforts. Sue organized the breakfasts and tail gates we have all enjoyed after an exhausting racing day.

On the committee boat Jonathan and Anna Gorbold (yet another FD Sailor Family) did an excellent job running the races with minimal down time and well positioned course relative to the shifty wind. I am learning that Jonathan was the real driving force behind this event: he was the regatta chairman and in charge of its organization. He was not only the PRO but also planned for all the additional help that is critical for a successful dinghy regatta that includes the support boats and manpower, particularly critical for dinghies that can go over in strong shifty winds, while Anna worked on the race committee boat assisting in running the races.

Overall, this was yet another great event hosted by the Canandaigua Yacht Club under the supervision of Jonathan, Anna and Sue, with invaluable help from Paul Hemker and Chris Liberti.  Thank you all!

I am looking forward to returning to this awesome sailing place and meet again the wonderful hosts as well the great racers appreciating the venue as much as I do.

The next major FD sailing event on the East Coast is the Pig Regatta (named for the famous barbeque the organizers offer at the end of the races) scheduled for September 24-25 2022, on Brookville Lake, Indiana.  That event is announced here: https://sailfdusa.org/2022/05/22/pig-regatta/ 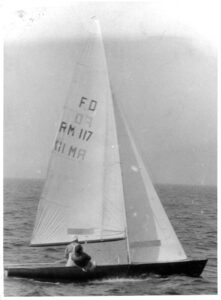 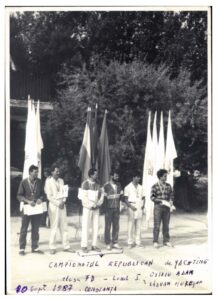 By the end of the last century, I was happily sailing the Flying Dutchman on the Black Sea with a good friend of mine, Razvan Muresan. The above picture is the best the technology of the day could capture in Eastern Europe. While the picture is not bad, we did enjoy more spectacular sailing moments left unrecorded, unfortunately.

In ’87 we won the Nationals for the first time. My friend gifted me a personalized picture from the awards ceremony, which reads in his own hand writing: “The Republican Yachting Championship. FD class – 1st place:  Ovidiu Adam and Razvan Muresan. September the 10th 1987 Constanta”  (As a side note, the city of Constanta has also hosted the FD Worlds in 2010). 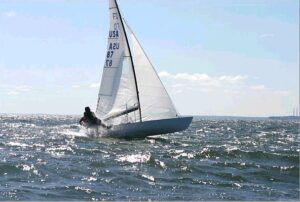 10 years later, I have moved to the United States, bought a computer, and opened an email account. I reconnected with my friend via email, and we resumed our lifelong friendship. In the 2000s he sent me a message, like (paraphrasing): “Hi Ovidiu – long time no see. Since your departure a great thing was invented, it is called the Internet, and it is loaded with cool pics. Check out the attached one, randomly picked, to remind you of how we used to sail together on the Black Sea.”  At the time none of us noticed the coincidence between the sail number, and the year of our success. My friend was unfortunately lost to cancer in 2013, and I never had the chance to expand the topic with him. 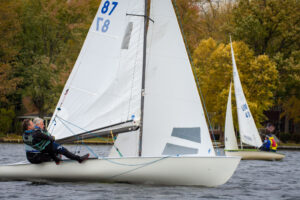 In 2020 my brother Razvan (same first name as my friend), found a boat for sale and we decided to buy it.

Well… you guessed it.  It was indeed the USA 87, whose picture I had received 15 years earlier. (In full disclosure, the picture shows the previous boat Jim Algert has sailed, and not the actual hull we have bought). In the process, we had the privilege of meeting the seller, Jim Algert, great sailor on the West coast.

We have learned that Jim has had some great sailing adventures both in San Francisco Bay, the Berkeley Circle, and Brazil. He fondly remembers sailing under the Golden Gate at night with his crew standing on the foredeck as the boat planed.  While in Brazil, a tank on his Plastrend filled with water.  They were very slow on one tack, but on the tack that counted, they sped by everyone while planning.   They would sail up to the boat house in Brazil where someone would greet them and take the boat inside with the sails up.   Jim likes to sail with a very little rudder.   As he reminds everyone, you should be able to sail the FD with no rudder on the boat.

Buying the boat was more than a simple transaction: it was also about sharing memories, adventures, remembering old friends, and  making new ones.

After buying the boat, I called my friend’s wife (Hey Gabi, if you read this, it was nice talking to you last year!) to share with her the whole story, and point out the clairvoyance her husband had. She knew about our reconnect on the Internet and the emails exchanged, but she no longer remembered the attachments to those emails. There seems to be enough coincidence here to surprise anyone, so I went into details, and explained again.  She was getting it little by little and in the end she asked the $1M question: “Yes,  but how did Razvan know 15 years ahead of time, what boat will you be buying?”

Since Jim Algert chose to retain the USA 87 number, you will now see my brother and I sailing the #8 instead (, as depicted by “The Three Amigos” post, for example).   Long live USA 8!

This September Paul Hemker has organized the Oktoberfest Regatta on Brookville Lake, Indiana. This is a beautiful lake, about 10mi long and 1mi wide, with good wind and warm water, and located here: https://goo.gl/maps/o2eqwgyHQe45KU7B8.

We had 3 Flying Dutchman boats reaching the location and competing seriously while having fun and enjoying the venue. This was a true Three Amigos event, where we got to meet new people, make new friends, and comment on the various rigging innovations that the open design of the Flying Dutchman class allows. While the event was located in Indiana, we had teams coming from Ohio (Paul Hemker), Michigan (Peggy Menzies, Razvan Adam, and Ovidiu Adam), and Missouri (John Bick and Rick Mitchell).

The Race Committee has succeeded to run all the 7 races scheduled in two days. The first day the wind blew 10kn with gusts of 20kn, while on the second day it dropped to about 8-19kn.
We did enjoy very welcome and highly appreciated meals at the end of each of the days on the picnic area on the beautiful lawn near the ramps. The venue is easy going, and allows boat launch from both the dolly and the trailer. And best of all, cars may be parked near the boats.

Overall the three participating teams have won the three places on the podium in a win-win outcome where friendship, fun and the beauty of sailing the Flying Dutchman were the most valuable prizes. I am looking forward to return for the next event hosted here.

Pictures and videos are available here, courtesy of Daniel CaJacob, our PRO: