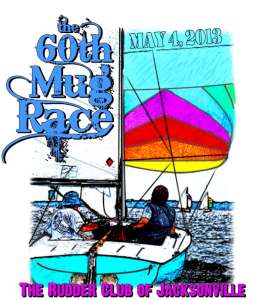 When Kathy and I returned to the United States late 2004 after living in Italy for nearly four years, we had to relocate to the east coast due to Kathyâ€™s work commitments. We chose Orange Park, Jacksonville from five options, for various reasons, one being that water was close by and I could return to sailing once again.

I investigated what type sailing existed in or close to Jacksonville and the primary result from my search was some race called the â€œMug Raceâ€. It was too vague for me to understand but once settled in Jacksonville I found that the logistics of this race werenâ€™t suited to my sailing plans, although each year I would read the newspaper results and see again a photograph and report of the Bill Roberts designed and owned 32â€™ Supercat with the three crewmen on trapeze wires and giant masthead asymmetrical gennaker, once again leading the fleet home for line honors.

What is the Mug Race?

The Mug race is reported to be the longest river race in the world at 38.5 NM. Fleets in the mid-two hundreds have been seen. It is sailed on the St Johns river, one of only two northerly flowing rivers in the US, I believe. It starts in the town of Palatka and ends in the town of Orange Park. It is an all-comers race and the committee allocates handicaps primarily based on the Portsmouth handicap system. You get everything from mom and pop cruisers, sailing canoes to the monster catamarans. I would guess that of all the entries approximately twenty five percent seriously entertain winning line honors. It is a pursuit race where your handicap is given to you at the start. You individually start at a given hour, minute and second. Theoretically everyone should finish at the same time.

Finally last year, Pavel and I decided to attempt to race in it. I was inquisitive to see how a Flying Dutchman would show against many different types and classes of boats. The actual decision was Pavelâ€™s as we initially planned to do a weekend of training. The race was a very light air affair and despite leading for a while, the wind shut down completely for well over an hour and then filled in from behind, so the race really started again. We crossed the finish line ninth out of approximately one hundred and twenty starters. We took approximately ten and a half hours to complete the course and I had trouble sitting down for the next few days. Only half the fleet finished before the finish time deadline, official darkness. I swore I never do the race again!

Onward one year and I rang Pavel to see if he wanted to do the Mug Race again to complete last yearâ€™s unfinished business, he said yes. This year the forecast was ominous, thunderstorms and lightning and very gusty winds. This affected the casual participant entries but never the less a large number of boats still faced the starter.

I was less prepared this year than last and it was a scramble to make the start. I had set up the boat in Palatka the previous afternoon, but driving rain and Pavelâ€™s impending airport pick-up time saw me far from completing the task that day. Interestingly a gentleman came over and began talking to me while rigging the boat. He said that his name was Bill Roberts and that he was sailing a 32 foot catamaran which was one of his Supercat designs. He added that he was a former FD sailor and spoke of the years he was in the class and that stated that he had invented and installed the first spinnaker launcher on it.

On the morning of the race, Kathy and our friend Mike Gilmore, drove down to Palatka with Pavel and I, to help us set up and launch and they would bring the car and trailer back to Orange Park.

Race morning and still it was raining. The Forecast was 15-25 gusting 30 from the northeast tending easterly, great catamaran weather. We still had a lot to accomplish race morning and we ended up late for our start time. Not a good beginning!

The first three miles were a two sail reach. With trees lining the shores and our shorter rig than some of our competitors, we tended to miss out on some of the wind. The wind would come in gusts so at one moment you might be in 8 knots of wind, the next moment 25 knots. I debated setting the kite but we needed to turn right at the first bend in the river and I wanted to make this turn as tight as possible. So the first reach seemed quite slow and underpowered.

After we turned east we were sailing in approximately 15-22 knots of wind and beating. We were on first cringle wishing we were on second but never the less making big gains sailing through many of the earlier starters. By the time we turned back north at the second river bend, I could see only two boats ahead. We stayed against the western shore looking for current and tide relief and passed them. We were still hard on the wind on starboard tack, but were slowly being lifted toward the next turning point. It is a river and therefore has a set current direction but it is also affected by the Atlantic tides. Very different from normal tidal sailing.

As the gloom cleared a little we could make out three more boats ahead but we were catching them fast, and by the time we caught the leading Hobie Cat we were beam reaching. For the next hour we were planing very fast and soon lost sight of the boats behind. The only company we had was the lead boat to leeward and behind. I said to Pavel, â€œlook how fast he is going, and we are doing the same speedâ€.

Keeping the boat flat and planning fast was taking its toll on me physically, and I was running out of energy, which in turn nearly lead to us capsizing. From that point we began dumping both sails in the gusts. By the time we reached the Shands bridge, a large chop had formed, and passing between the bridge pylons at speed was treacherous. This was the unofficial half way stage and we had to check in with a committee boat as we passed. We were so on edge at this point that I dare not move to show our placard, for fear of capsizing under the bridge.

Leaving the bridge, we were still planing fast, although the chop had subsided a little. We now had a very weird feeling about the race. Although it was still gloomy, we could see for quite some distance behind us, but there was not a single sail boat to be seen. Behind us was a new lead boat, the previous one must have turned back toward Palatka and this new one must have come from Orange Park. We started speculating that the race may have been called off. We had to make it to Orange Park regardless so this wasnâ€™t a moot point in our plans. We did notice that the lead boat was now only semi planing, meaning that we had slowed significantly from our previous high speed sailing. This was partly due to the occurrence we had seen the previous year, in that the breeze seemed to be higher up in the second half of the course. No doubt caused be the land height, trees and housing.

When we sighted the Doctors lake inlet bridge on the western shoreline, I knew we were within three miles of the finish line. We were now back hard on the wind and it was going to be a hard beat up to the finish line which was located at the far north eastern point, just south of the Buckman Bridge.

This beat seemed to last forever and. I was done with stacking out.Â  About a mile from the finish we spotted our first pursuer. It was a F18 C2 catamaran and was roughly two miles behind. I figured they would be twice our speed so I had better start stacking again. Further back we could now make out the 32â€™ Supercat. The finish line couldnâ€™t come soon enough, but we crossed with plenty of time in hand over the two catamarans.

We had taken just over four and a quarter hours to do the course, and according to the GPS records, we had sailed about 44 NM. We received a great reception and the locals were in disbelief that a monohull had finished first. So for the second year since the races inception, a Flying Dutchman has won the Mug Race. The first was evidently 1958.