Things have been hectic for everyone as spouses and friends arrive, making connections, figuring out how to meet up and, for me, dealing with a cold.  Paul Hemker, John Best and the rest of the measurement team have now processed most of the 135 boats competing here. 135 boats, 19 countries.  I haven’t had confirmation, but this may be the largest World Championship the class has ever had.  This is how it is being reported in a local Italian press release. You’ll have to do the translation yourself!  Watch that page (now on the “Racing at Garda” menu item above) as it may have ongoing results.  We’ll keep you posted on that.

Waking up every morning here at Garda is really thrilling.  Overlooking the lake on the side of the mountain we can see dozens of kite and wind surfers taking advantage of the early morning wind.  Hearing churchbells bup and down the shore as we sip morning expresso.

Today we have a practice race and will see how we manage 135 boats on a start line.Â  There is a rumor the fleet may be split, but we shall see.Â  We have been comparing notes on the winds here as all boats have been out practicing. A variety of patterns that do shift from day to day.Â Â  This evening we all participate in a parade through the town.

Here are a series of shots taken after the container was delivered. We launched today and took GBR367 for a spin. More on that later.

Hard to imagine how we will get 133 boats set up here.   Plus we heard from the Stephano, who works on the marina staff, that there will be an additional regatta going on here this weekend with 50 boats.

Give us some comments as we go along, we can answer questions too!

The team has been arriving over the past few days and on Monday June 27 the container arrived with the boats.  There is always a little anxiety as the container doors are opened and we take a quick look around to see if there is any damage.  No problems!  And so we all breathed a quick sigh of relief and set about unpacking.  Usually everything is fine, although a few years back on a trip to Spain, an anchor point welding gave away and a boat dropped down a few inches. But we typically tie at least two safety lines so significant damage was averted.

So far, Gorbolds have arrived, along with Lin, Paul Scoffin and myself.  There are maybe a half dozen other boats set up as well.  Jonathan and Nigel have been out, though the rest of us are knee deep in boat games.  And enjoying Italy.  More pictures will be here soon, as we are still trying to get reliable internet and connections set up.

The email from Lin in March asking me to sail with him in the Worlds at Garda provided me with a new focus and revived many memories of sailing with Lin in 1996.

I was watching the US Nationals on Lake Canandaigua when a call came through from the Committee Boat that Lin needed a crew due to the unfortunate illness of his crew. We had some great fleet racing and indeed a needle match race in the last race. Jonathan Gorbold had carved a set of magnificent trophies for many of the helms and crews and one has a special place in my home.

Since then I have kept in touch with Lin and we have renewed acquaintances at various Worlds in Europe and New Zealand and the 400th Anniversary Regatta at New York.

After quickly agreeing to sail with Lin in the Worlds, I visited Connecticut and enjoyed the generous hospitality provided by Sascha & Job Sandberg who organised the US Nationals at Noroton YC 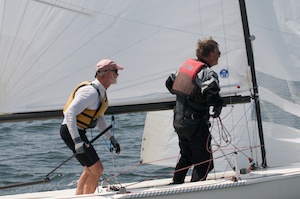 which Lin and I used to get in some practice for the Worlds – despite the best efforts of fog and reefs to scupper Lin’s careful preparation of the boat!

After the container was loaded, we enjoyed a very convivial evening with Lisa & Susan and headed back to our respective homes.

On Saturday, Susan & I will be crossing from Dover to Calais and thence drive to Lake Garda, the mecca of sailing in Europe which has attracted a record FD Worlds entry of 132 teams. The previous record for FDs was also on Lake Garda in 1996 when there were 123 FDs racing from the same start line!

In 1996 the racing was at the northern end of Lake Garda where the wind can blow with great ferocity and it did! One day the Committee boat had to be towed back to base and many FDs were scattered upside down in the lake and around the northern shores of the lake.

However, at Malcesine, which is mid way down the eastern shore, the lake is wider and the funneling effect of the cliffs – very steep, tall and dramatic mountains – is less severe. Winds should be more moderate but no doubt by the end of the Worlds the normal refrain heard from the locals at nearly all venues will be heard…It is not normally like this!!

Last week Kurt, our fearless shipping coordinator told us, “Keep your anxiety in check FD people!”And well we should have.  This evening we got the following note:

Container was off loaded in Genoa on Jun-19 15.00 hrs. We are proceeding with Customs clearance. It will take us 3.5 hours to deliver from here. I think there is a very good chance you will have your boats there in time for the event. I know you expected nothing less. Stay tuned. Travel safe.

So good news.Â  We will continue to endeavor to keep our anxiety in check and in a week we’ll be assembling our boats on the bank of Lake Garda.  We expect nothing less!

A hectic last few weeks saw Pavel twice flying from Pennsylvania to Jacksonville enabling us to complete the refit and just make it to Connecticut, just in time to relaunch NZL-145 for race one of the US Nationals. Immediately after, the boats bound for the Worlds were loaded into a container, and it was with great relief that we saw the container doors close with NZL-145 inside.

Paul, Jimmy Tutten and Pavel (l to r) checking that we have an FD

With all that is going on in everyoneâ€™s life these days itâ€™s sometimes hard to keep sailing schedules aligned and on track.

Fifteen years ago, much of the U.S. fleet was preparing for our National Championship in Canandaigua, NY. During a warm up at the race site for the regatta, the person I was planning on sailing with encountered a health problem that kept them from continuing in the regatta.

Fortunately at that time Richard Phillips, well known to everyone in the class, was touring the U.S. and had stopped by the regatta site for a look. He was quickly recruited to sail. We had a good series, won that year by Mike Loeb and Guido Bertocci, with some of the top positions decided in a dramatic last race.

Now, again very fortunately for me, Richard has agreed to sail with me at Worlds coming up soon. Seems that sometimes good things can come around again!

Looking forward to seeing and sailing with friends from around the world very soon now.

All the US sailors, families and friends going to the World Championships at Malcesine on Lake Garda in Northern Italy thought it would be fun to share the trip with everyone.  So we have set up a Web log page to do just that.  Just click the Garda! menu item on the right side of the USA Class home page and you can see what we are up to, hear from some of the competitors and officials. and maybe even chat with a chef from that tiny cafe we liked so much.  We’ll try to keep you up to date on the goings on and of course links to daily and overall results. The Worlds run from June 30 through July 9, but most of us will be there before that, practicing, preparing and just enjoying what Italy has to offer.

END_OF_DOCUMENT_TOKEN_TO_BE_REPLACED

FD TeamUSA and the adventures at the 2011 Flying Dutchman World Championships in Lake Garda, Italy

We said that 4 boats were packed off for Garda.  Four US teams, there are more attending. From the US we have:

Everyone has their posses and we’ll introduce them all later.  Good luck to everyone!{jcomments on}