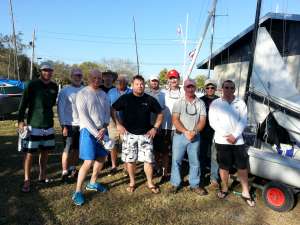 For many years we have held the FD Midwinters at SPYC in downtown St. Petersburg. Due to some scheduling and other reasons we moved the regatta site this year, to a place I had not sailed out of since a teenager.

Gulfport Yacht Club is one of the old Florida clubs that is small on buildings and ceremony, but big on friendly atmosphere and the real reason we got to these things, the sailing. We easily beach and ramp launched, with a short sail to the course site, which was Boca Ciega Bay. The bay is protected, yet close to the coast, so getting some breeze is always more likely than at other local sites.

Long time FD sailor and friend of the class Dave Ellis served as PRO, and with his team of GYC volunteers ran 5 races Friday, 4 on Saturday, and 2 on a beautiful and warm Florida weekend. The FD’s ran windward-leeward courses all weekend.

The Contender fleet joined us for their Midwinters as well, and it made for a nice melding of two like minded classes. To make it easier for the RC and maximize the number of races, both classes decided to utilize gate starts. It was a good move for that reason, and I think well recived as a change of pace for the FD’s, for whom usually use line starts.

Peter Carr and Derrick Hiltz came from Seattle to be with us, with the Wrenns kindly lending them their boat for the series. Buzz Ballenger and Kurt Hemmingsen also travelled a long way from Santa Cruz, since Paul Scoffin lent them one of his Lindsays. We were happy to see Stan Hyatt out with the venerable USA 219. As it turned out, Stan’s crew Chris Russick could not sail Saturday or Sunday, but since Paul Scoffin’s intended crew also could not go, those two teamed up in 219 for the rest of the weekend. Our Presidente Sayles sailed with local Melges 24 sailor Nick Bradford the first two days, then Chris Stocke. Chris is on the sailing team at USF, as is his brother Will, who I was fortunate enough to sail with. Will is new to the FD, but did an outstanding job all weekend.Â Ironman Paul Hemker arrived after one of his countless marathon drives with the class trailer to sail with veteran Fireball sailor Duncan Shaffer.

After the races FridayÂ the sailors from both fleetsÂ convened at my house, for a great meal cooked up by my wife Lisa. I saw more than one return trip to the buffet that night! Everyone seemed pleased and recharged the next day.

Saturday dawned bright and clear with some nice northeast breeze, and we were able to get in four races before the land and sea breezes started to conflict. Sunday gave us the best wind velocity of the weekend, with true wind speeds in the mid to upper teens. Good raked conditions, and a bit shifty near the top mark.

At the end of tha regatta tallyÂ Will Stocke and I had good success, with Buzz/Kurt in second and Tim/Nick-Chris in third.

I’m looking forward to seeing more FD sailors this summer, I know Tim’s working on scheduling Nationals and North Americans. That schedule should be up soon, stay tuned!